The Alabama Law Enforcement Agency (ALEA) is proud to join Governor Kay Ivey in unveiling the state of Alabama's modernized driver license system which will provide significant improvements to both citizens and Driver License personnel across the state. The Alabama Law Enforcement Agency Driver License System, simply known as LEADS, will completely revitalize the current system, which has been in place for nearly two decades.

Once LEADS goes live, citizens will have access to a variety of new options and such enhanced services as allowing individuals to pre-apply for the Alabama Driver License and enter all necessary information prior to visiting a local office. Additionally, ALEA will offer expanded online services including but not limited to:

In order to install the new system and new hardware,

In addition to the new hardware, tremendous amounts of data received since 1970 will be converted into LEADS. While offices will be closed temporarily to the public and online services will not be available during the transition period, ALEA Examiners will continue to administer Class D and CDL Road Skills Tests. County Offices will remain open but strictly for revenue and probate services.

LEADS Flyer for Partners and Businesses 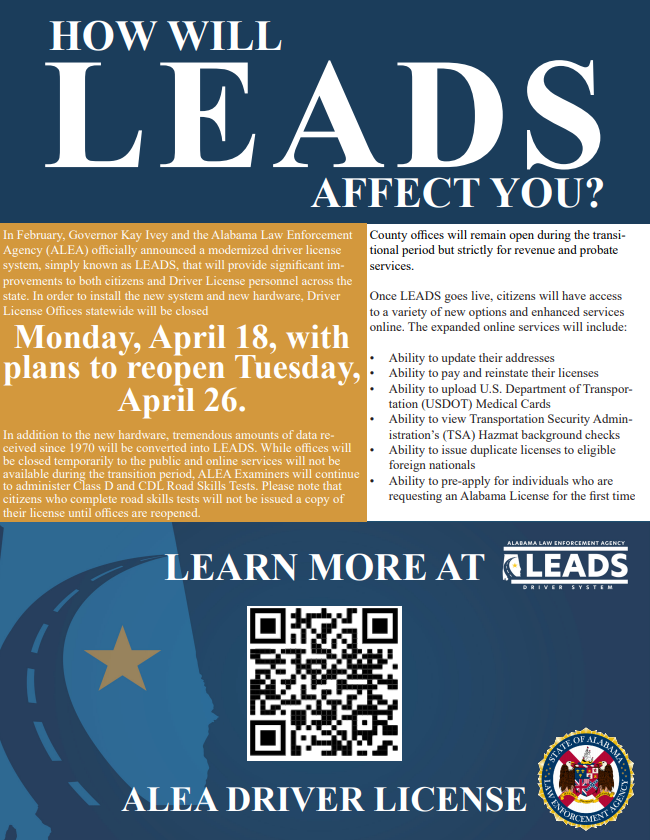